People: the (not so) secret ingredient in winning campaigns

Just over a year ago, I met Nancy Cooke, Director of Political Operations with the PC Party of Manitoba. I quickly learned that her leadership is a driving force behind the party’s organization and modernization - she even rides her bike to work! The Manitoba PCs were using a proprietary access database like many conservative parties across the country at the time – but were starting to integrate new technologies 21st century tools like NationBuilder.

The team was in a good place – they recognized the need to modernize and truly engage with and understand their constituents. After many conversations about community building, we had an agreement to adopt NationBuilder as a primary tool for their election campaign.

The process of moving the PCs to NationBuilder, was bigger than either Nancy or I had anticipated. Moving a provincial party from a number of legacy systems they have used for years to a modern, integrated system isn’t easy.  And yet, the migration provided an amazing opportunity to really dig into the PC’s processes, culture and data. Moving to NationBuilder pushed the PCs to review processes from previous campaigns that may have needed a refresh that had proven unhelpful in previous campaigns. It also meant they had to revisit years of data accumulation. Finally, the move to NationBuilder compelled the PCs to simplify their processes and focus on people.

Engagement for the win

The PC Manitoba team realized that in order to win the election, they had to engage everyday Manitobans in their campaign. They used the power of NationBuilder exceptionally, creating many opportunities for people to engage with the Party:

1. The party used NationBuilder action pages on their website, like a feedback page asking voters to submit their ideas for a better Manitoba. They also used NationBuilder’s social share prompt to activate people to recruit their friends. 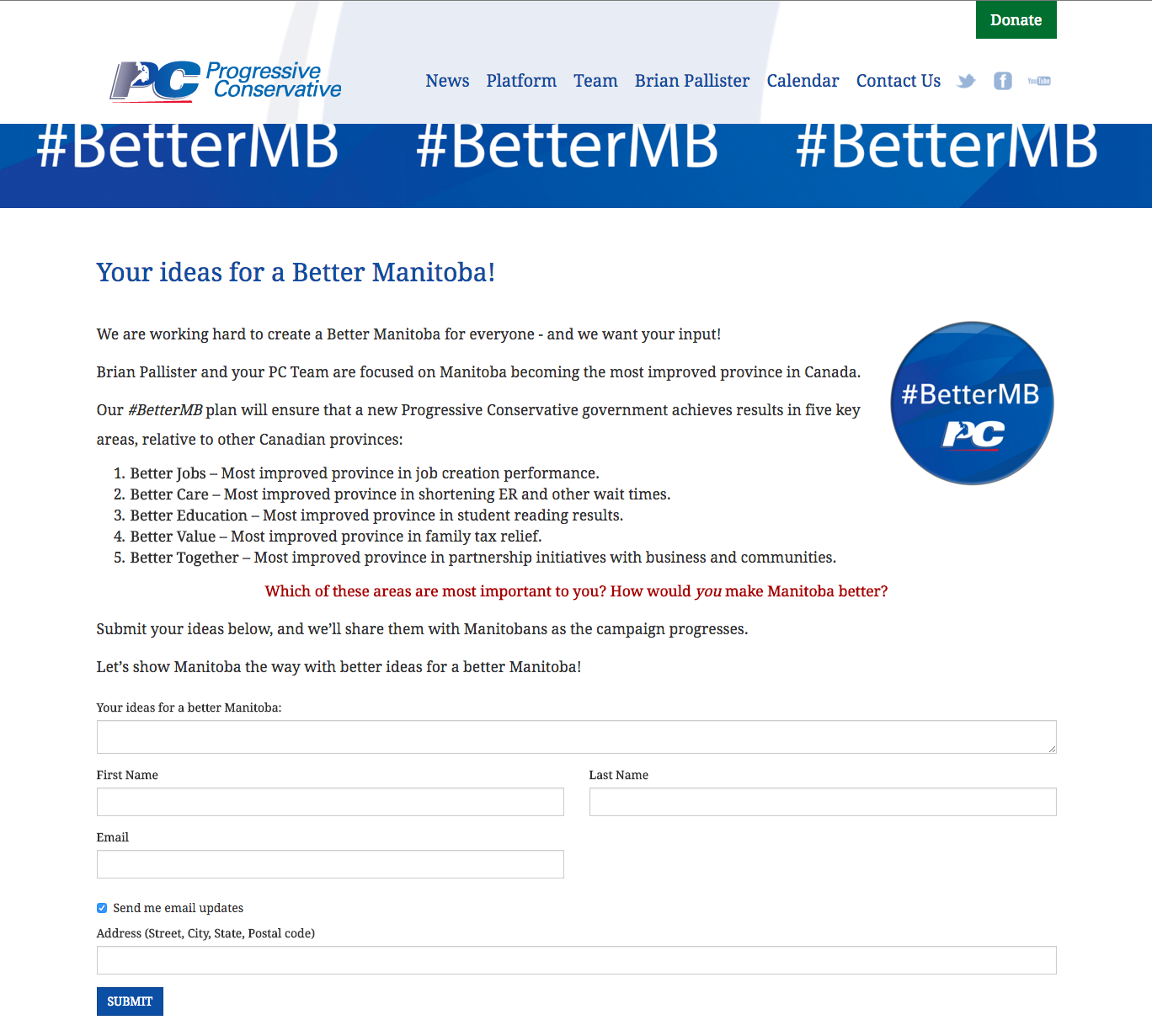 2. They deployed Subnations for each of their candidates so that data from the local campaigns fed directly to the central PC Manitoba Nation. This gave local campaigns the power of NationBuilder and HQ was able to track all of the interactions that were happening across the province.

3. They met people where they were at by using modern communications -  text, email, social media and mobile canvassing - that fed directly into their nation. They also provided multiple ways for people to engage - the youth team "Blue Crew" is a great example of this.

All of this paid off. In spades. The PCs won their first majority government since 1999. They took their seat count from 19 to 40 seats (the most seats the party has won in a century), and won the largest share of the popular vote in Manitoba’s history.

Elections have lots of moving pieces and this election was no different. By embracing 21st century leadership technology, the PCs showed Manitobans they were ready to lead and everyday Manitobans took them up on their offer.