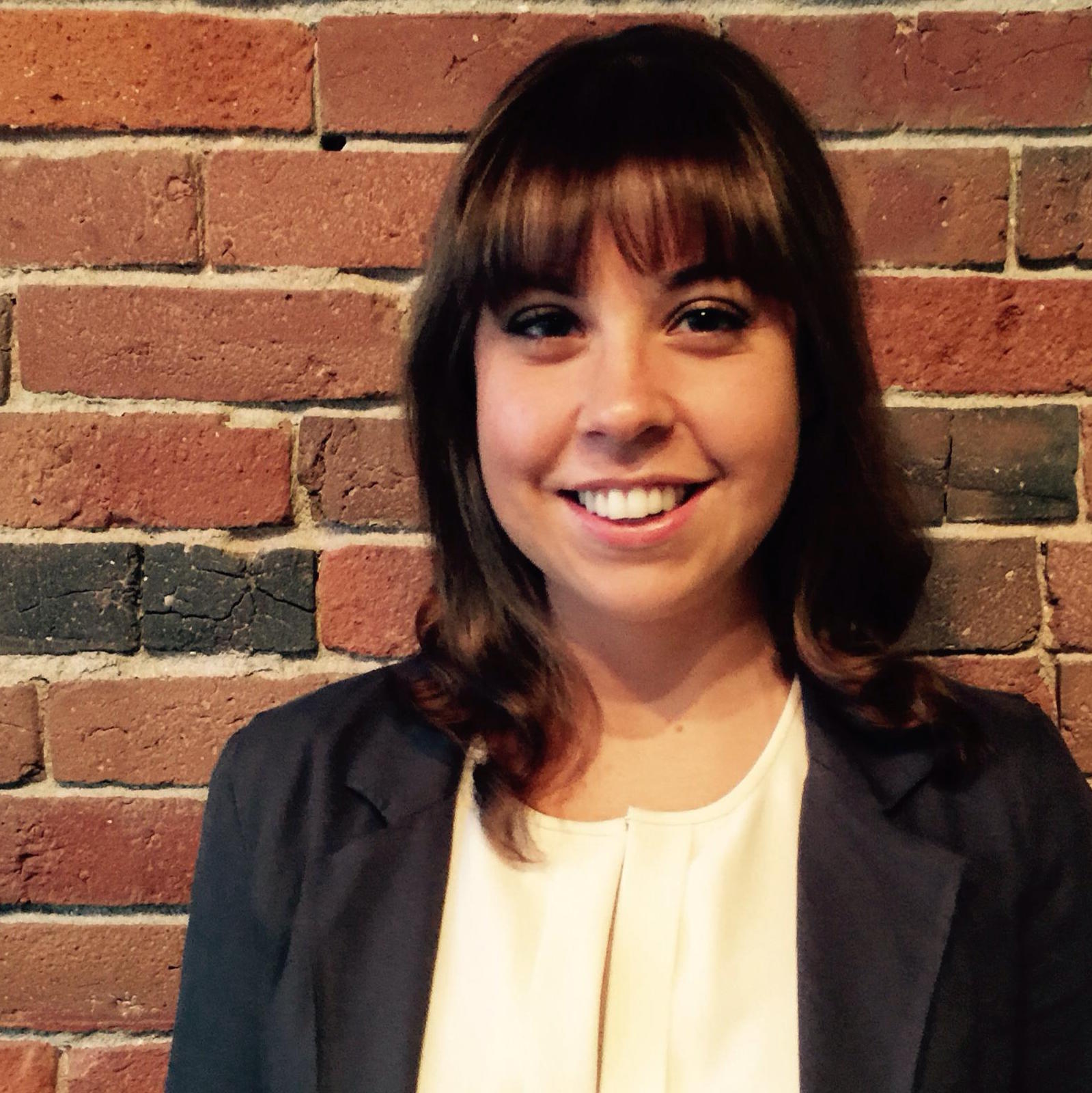 "Here at NationBuilder, I get to work with some pretty amazing groups who are truly engaging people and making change in their communities, provinces and country. For this week’s Customer Spotlight, I talked to Stefan Jonsson at the BC Green Party about how they're doing politics differently. My background is in Canadian politics and community development so I get especially excited to see political parties moving away from old school political marketing and closer to real organizing - That means putting people at the centre, providing multiple paths for engagement, and elevating leaders. I'm thrilled to see the BC Green Party renew engagement in democracy in these ways"

Victoria Cross: Describe the mission behind your organization’s work.

Stefan Jonsson: The BC Green Party exists to represent and serve the citizens and interests of the province of British Columbia through the formation of government. We seek to proactively meet BC's challenges and solve genuine problems for British Columbians through evidence-based, ethical decision-making. We are a member of the Global Greens network, an international movement of local political parties who are committed to six fundamental principles: sustainability, respect for diversity, participatory democracy, ecological wisdom, non-violence and social justice.

We believe that a political exists to serve voters in being active participants in their democracy. The modern world of politics are crass and overly-partisan. Political parties serve themselves in the interest of obtaining power. We believe that politics must be returned to the people through true representative democracy, which means that MLAs are elected to actively work with their constituents to find solutions to society's problems, and then represent their constituents in the Legislature. We do not believe that policy should be dictated by any one political party or its leader, but through dialogue, outreach, a clear set of values and evidence. With the digital age, we have tools that allow us to do this in unprecedented ways. In fact, these digital tools evolve so quickly, we are constantly amazed at the innovative approaches we develop to serve the voters of British Columbia as active contributors to our democracy. NationBuilder has been fundamental to expanding our understanding of what is possible and making it happen.

VC: Tell us about a success your organization has experienced in the past year? 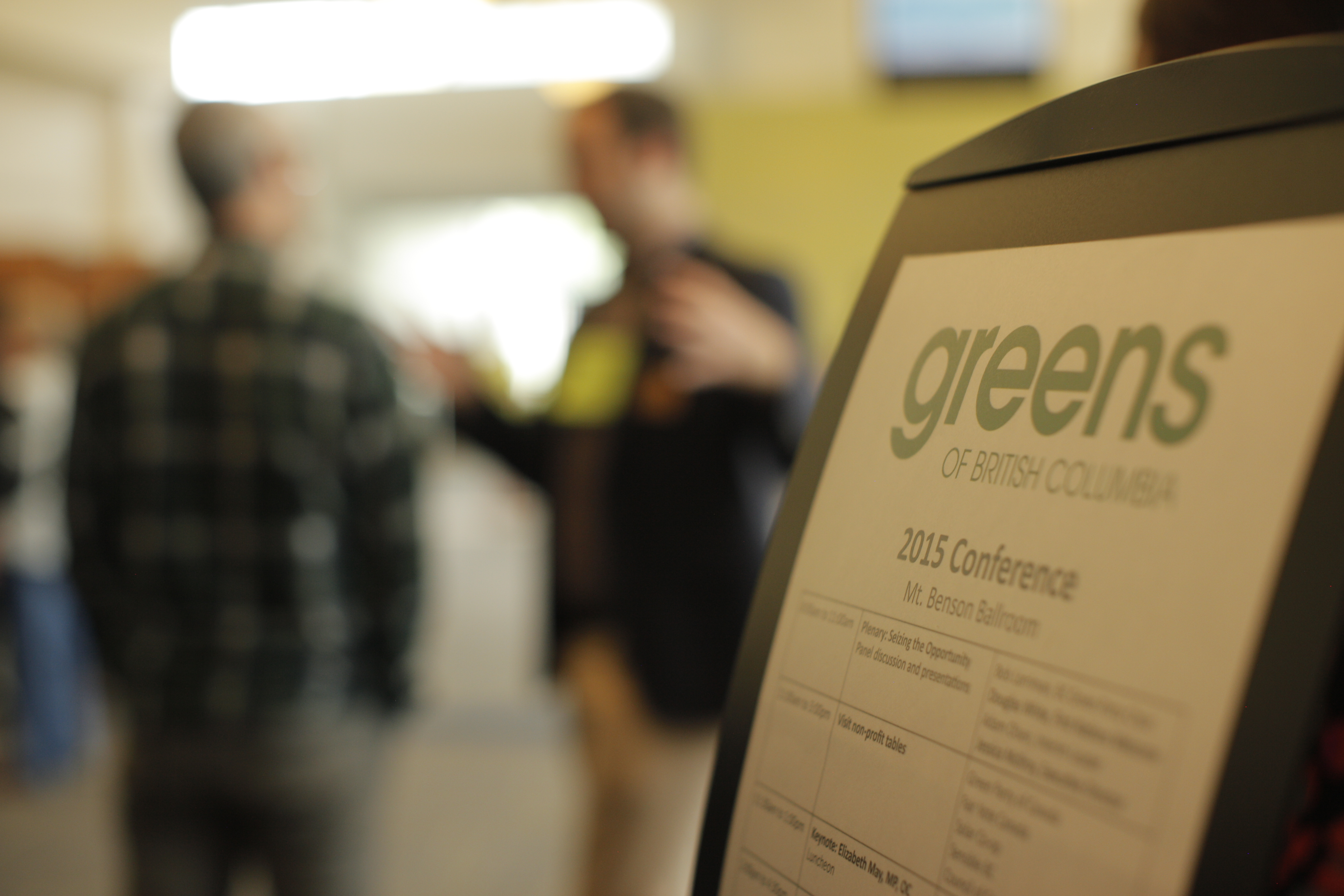 SJ: In the past year, the BC Green Party has substantially grown in response to increased engagement from supporters. Leading our successes has been the extent to which we have driven conversation and debate on a number of provincial issues. In September, the province was dealing with an extended labour crisis in public education. The BC Green Party led the call for binding arbitration and reforming the relationship between the government and labour union.

In the end, binding arbitration was not necessary to resolve the immediate crisis, but the party raised considerable pressure on the government to act in the best interests of students, teachers and families. The engagement of just nearly 30,000 British Columbians who joined the Green Party in seeking a fair and timely resolution to this issue has initiated a new relationship between the party and supporters who are concerned about education. Since then, we have worked to move these relationships further, both by more engagement on education and by expanding into other topics and issues where appropriate.

VC: What have you learned this year about growing your community that you would share with other leaders?

SJ: That giving every voice a forum to speak is very important. As a political party, we have very strong views on many issues. That doesn't mean, however, that we are not interested in opposing views, or that we want to alienate anyone who does not share our perspective on an issue. We recently launched a petition calling on the BC government to rethink its LNG industry expansion, because it will make it impossible for the province to reduce its greenhouse gas emissions. The petition itself was a success, gathering over 7,000 signatures. However, we also received a number of messages from some of our supporters who did not agree with our position and wished that they had an opportunity to voice their opinions.

In response, we launched a survey inviting anyone who did not sign the petition to share their own perspective. It has helped expand our own understanding of the issue, and we have sent directly to our legislative office. It has also engaged a segment of our supporters who would otherwise have been left out of our political activities. As a party that includes "participatory democracy" as one of its core values, we have learned one way in which we can actively encourage all members of society to be actively engaged in our democratic processes. We will incorporate this engagement tool for people who don't share our views on specific issues into all of our future campaigns. 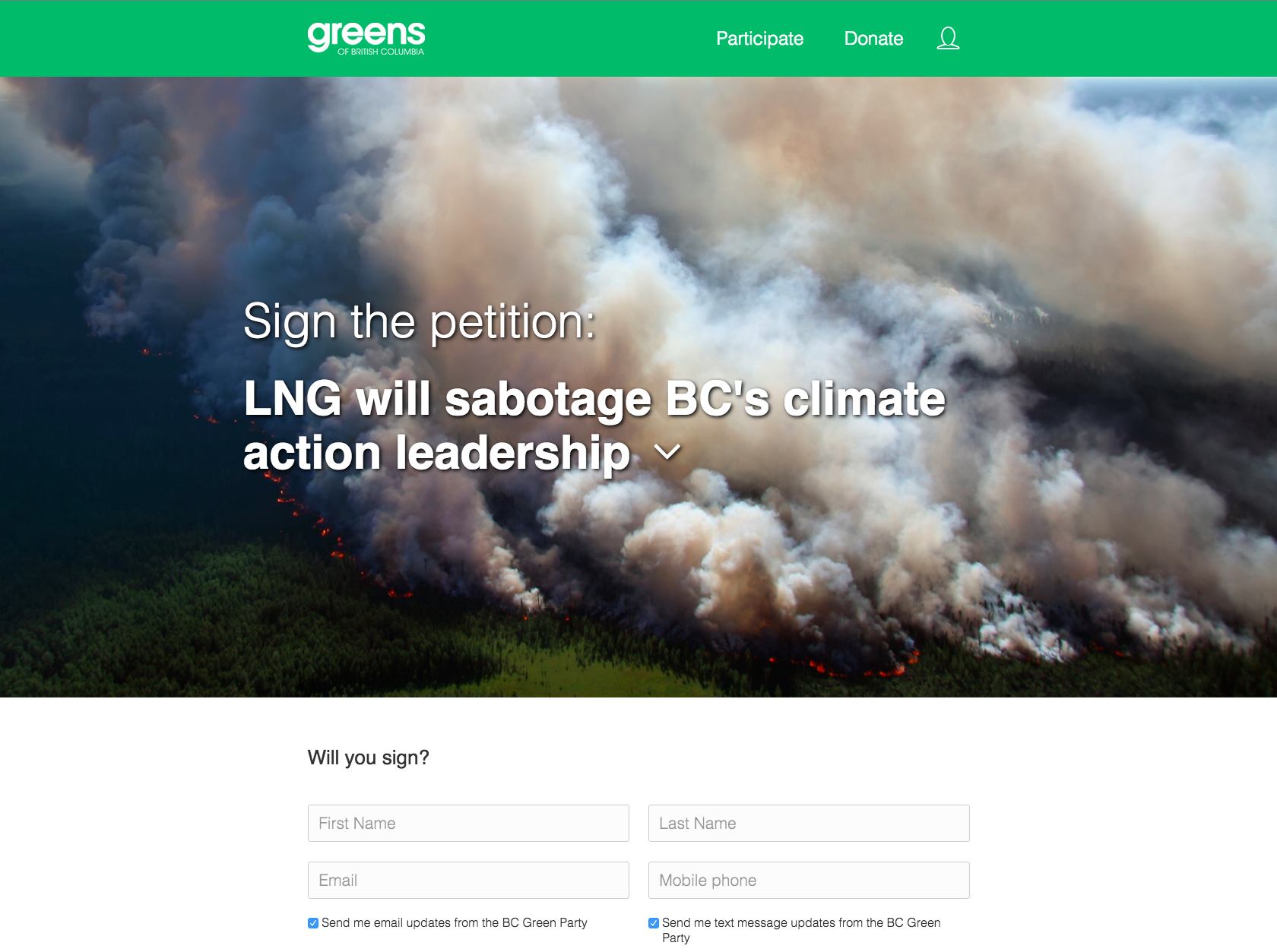 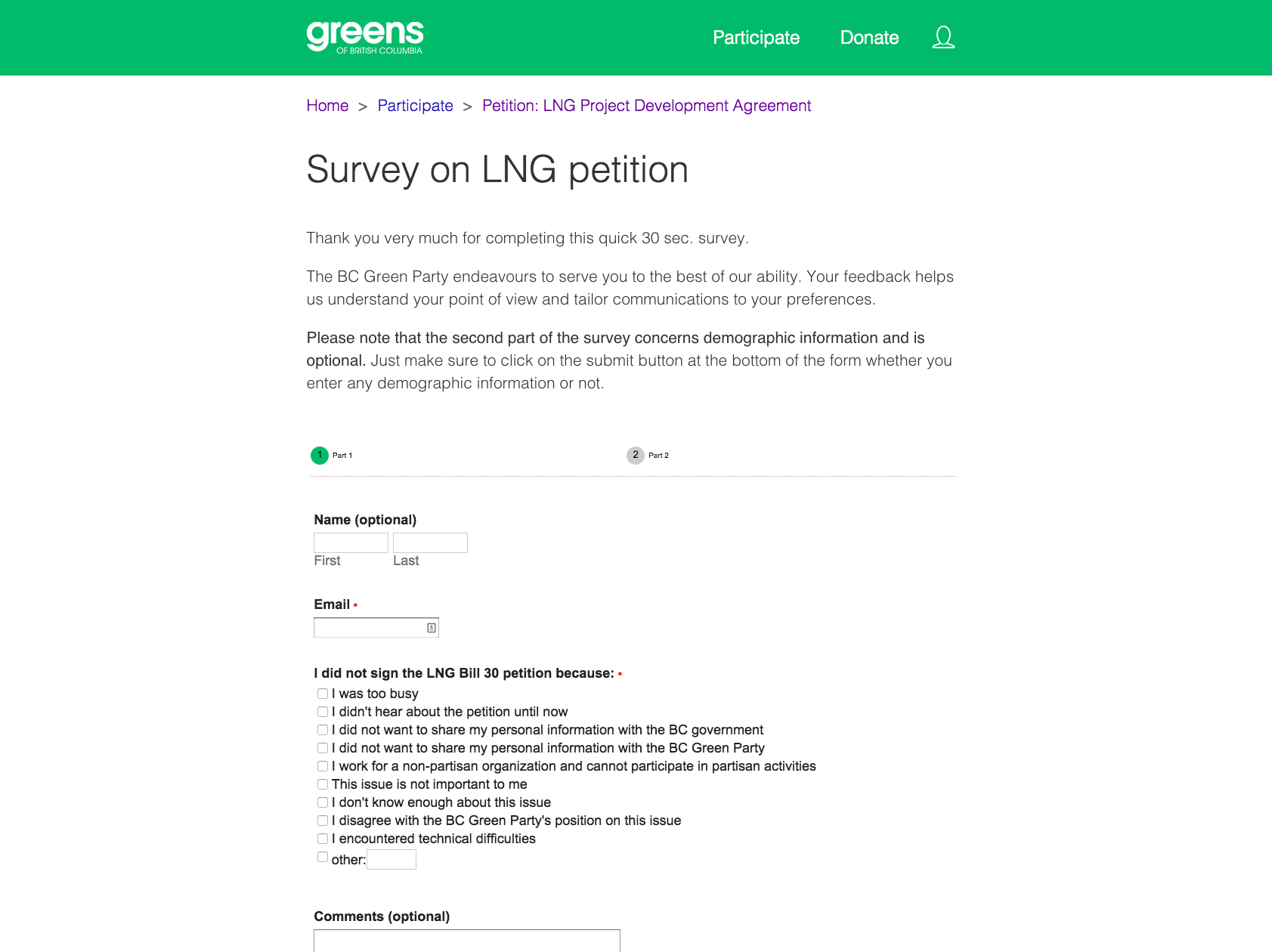 VC: How are you using NationBuilder to lead people to action?

SJ: We are constantly evaluating how effectively we are using the system and what new uses can be developed. We are currently focusing a lot of our energy on learning how supporters prefer to communicate with us. It is extremely important to us that we meet people "where they're at" - in terms of their interests and commitment level to the party, but also in terms of how they want to communicate with and support our organization. 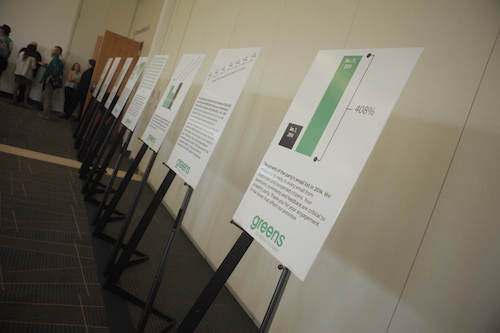 In particular, we have been incorporating text messaging into our regular message blasts to supporters, and we have been reaching out to others individually through Facebook and Twitter via their NationBuilder profiles. With custom fields, we are recording how people want to hear from us on different topics - news and updates, events, fundraising and calls to action. We're also working on identifying how often supporters want to hear from us so that they can be as engaged as they prefer. We will always try to move our relationships further along to higher levels of engagement, but we want to balance that with respecting supporters' limits.

VC: What exciting projects do you have coming up?

SJ: We have developed a new website over the last few months. It is now online and we're implementing additional phases as they are ready. The website is meant to be all about the supporter, giving them tools that are unique to their own interests and level of engagement. For example, the supporter sidebar has been completely reworked so that it reflects different calls to action depending on their engagement level. If someone has donated recently but they are not a member, it asks them to become a member. If they have made a pledge but have not fulfilled it, it asks them to complete their pledge. 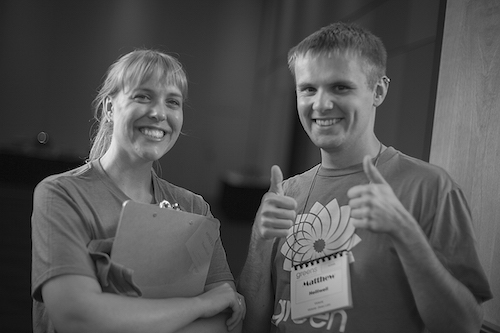 We are also trying to give people as much or as little information as they need in order to act on a particular call to action. For our recent petition against LNG expansion, we modified the petition template to display the signature form at the top of the page as well as at the bottom below the petition text. If the email or text message was all they needed to feel comfortable signing the petition, they could sign it right away without searching for the form. If they wanted more information, they could read the text and then sign afterward. We have many more exciting plans for future phases of our website development that will further implement a supporter-centric interface. We'll be continuing to roll them out over the next six months.